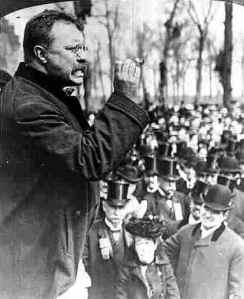 I am a big fan of Theodore Roosevelt (notice that I did not call him “Teddy.” He always insisted that anyone that knew him well didn’t call him that. He didn’t like it) and one of the best stories about him (of many) is the one about the time he was shot, but insisted on delivering a campaign speech anyway. Today, We’re History has a nice essay on that event. The man was tough.

The Smithsonian has a long but interesting piece on perhaps America’s first “mass shooter.” It happened in 1949, and the story is sadly all too familiar sounding today.

Public discussion about a woman being placed on our currency has subsided a bit lately, but today Emily Conroy-Krutz has a good blog post on the subject. In the context of discussing the currency issue with her classes, she had some success with a couple of interesting exercises that nicely opened up the conversation to women’s history more broadly, and to the limits of standard textbooks and the content of standard history courses. Their conclusion: putting a woman on our currency WOULD matter. (I think I’m going to try some of this in my classroom).

There’s an interesting archeology dig going on in the Georgetown neighborhood of DC that will hopefully reveal much about African American life in the Early Republic.

Love seeing this: in a New Jersey church cemetery, five African American Civil War soldiers are finally having their services to the country recognized.

Over on Civil War Pop Christian McWhirter has a nice review of the Civil War movie The Conspirator that I almost wholly agree with. If you haven’t checked out his blog site, you need to. As the number of his postings grow, he’s amassing quite a nice collection of essays on Civil War movies, video games, songs, and other pop culture mediums. It’s becoming a great internet resource.

And for today’s fun Halloween-season posting: here National Geographic has a discussion of all the people who have claimed to have seen Abe Lincoln’s ghost in the White House. The list includes Eleanor Roosevelt, Winston Churchill, and Harry Truman. Were these just “waking dreams?” You decide.