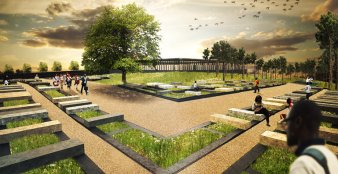 A rendering of a Montgomery, Alabama memorial to lynching victims.

It has been a few days since I last posted because I have been very busy with the start of a new semester. But I’m back on the case and ready to catch up on a few things.

Man, I love seeing this: Here in my home state of Alabama, plans have been unveiled for a large museum and memorial to the untold thousands of victims of racial lynchings in America. The  capital city of Montgomery–home to the Confederacy’s first capital–has given its support to the project.

Love seeing this, part two: As we know, there has been much debate lately on college campuses about building names that honor Confederate heroes. Some big news has come out of Nashville, where Vanderbilt has decided to rename their “Confederate Memorial Hall” as just “Memorial Hall.” This was not an easy thing for them to do, but not because of the typical backlash from those that hate to see the vestiges of the Lost Cause dismembered. In order to make the change, the university is actually going to have to pay over a million dollars to the Daughters of the Confederacy—an organization that played a pivotal role in the  creation and spread of the Lost Cause in the late 19th and early 20th centuries. How ironic is that?

I love seeing this, part three: As many of you know, I have a special fondness for the history of the Civil War’s 54th Massachusetts regiment, and my next book project (if and when I ever get the time) will likely be on their history and their place in our collective historic memory. (In many ways, I became a historian because of the movie Glory). So I was very happy to see that the town of New Bedford, Massachusetts, is set to unveil a memorial walkway containing the names of the men of their city that joined the 54th. It is located “just steps away” from where the recruitment center was located.

Man, I HATE to see this: As you may recall, Colonial Williamsburg stirred a lot of negative reactions from historical purists and public historians when they decided to have zombies invade the town for Halloween last year. Unfortunately, it was a smashing success for them, and so this year they are going even more overboard with it, with a storyline in which a sea witch has cursed the town. How bad will it be? Um, sea monster tentacles coming out of the Capitol building, a haunted house in the Raleigh Tavern, and dead pirates again roaming the streets. (And much more). As someone that is truly in love with Colonial Williamsburg and its mission, all this nonsense really hurts my heart. And I mean that.

One of the things that Colonial Williamsburg does best is their first person interpretations of the town’s enslaved community. For years, these programs have been their best and most powerful, giving visitors a personal perspective from which to view slavery. Over on his blog, public historian Nick Sacco muses about the benefits, problems, and appropriateness of first person slave interpretation at historic sites. I must say that I’m very uncomfortable with the premise behind the program he focuses on (“Follow the North Star” in Fischers, Indiana), which essentially has audiences play the role of runaway slaves. But over the years I have seen Williamsburg do some pretty incredible things with their African American interpreters. (Another reason the Halloween goofiness is an abomination when considering the true value of their mission).

Recent archeology in Greece has turned up a 3,000 year old skeleton of a teenage boy. The find may be definitive proof of the legend that the ancient Greeks made human sacrifices to the greek god Zeus.

Well, someone beat me to it: I’ve been thinking a lot lately about Donald Trump and the classic Bogart movie, The Caine Mutiny (if you have not seen it, you need to add it to your list of “must sees” in order to be film literate). Over on the History News Network, Robert Brent Toplin has also made a connection, but in a different way than me. He sees the film as a model for how the GOP can rid themselves of Trump. (Count me as believing that it is way too late for that). My thoughts were that the famous court martial scene provides a model for how Hillary should handle the debates: lay a trap that will play on his insecurities and paranoid personality disorders so that they are on full display. (Similar to how Tom Cruise handles Jack Nicholson in A Few Good Men).  Either way, you should check out Toplin’s essay and the film clips– if nothing else you  will see one of Bogie’s best performances. Maybe his best.