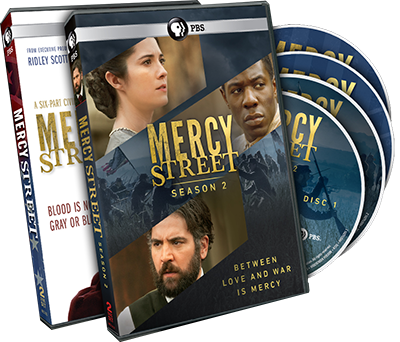 #SaveMercyStreet! In the meantime, DVDs of both seasons are available!

So my review of the Mercy Street finale has become my most read posting ever, so I’m hopeful that is a sign that the show has a lot of support and has a shot at getting picked up by someone else. Do you guys recall that HORRIBLE Civil War pilot that Amazon tried out a while back called “Point of Honor?” It was a mess, but perhaps they might be interested in trying out another Civil War show, one that is a proven commodity. They have the rights to showing Mercy Street‘s reruns already, so it just seems to make sense. And let’s not forget that A&E has had a lot of success with their historical drama Turn, which is soon to come to an end. Maybe they would be interested? Even History channel has shown an interest in being taken seriously again, so why not them? Lastly, WGN has had much critical success with Underground, so might they want to step in and save the show? Thus I really think there are a lot of possibilities out there. (Unfortunately, we also got word that Josh Radnor has a new gig for NBC, so that might present even more of a scheduling problem. But as much as I like Radnor, Dr. Foster could be recast. It wouldn’t be the first time in TV history!) I’m thinking that Amazon is our best hope. Has anyone started a petition? If so, let me know so I can pass it along.

Speaking of WGN’s Underground, their second season got off to a rousing start last Wednesday. We saw Harriet Tubman back down a slave patrol posse with a shotgun and an axe, a daring rescue from the hangman’s noose, and a shotgun toting “sewing circle” of abolitionist women. The episode also ended with a stunning murder that I dare say caught us all off guard. It was all rather intense, but I am really worried that the series is going to become too much superhero action and less of a well-developed character study and history lesson. As of now, I am most hopeful about Ernestine’s storyline, as we see she is now working in rather harsh conditions on a rice plantation, has resorted to drug addiction to survive, and seems close to breaking. I’m guessing she will rediscover the strength and resolve she once had, and thus it will be interesting to see what this will convey about slave resistance. Let’s stay tuned and hopeful. With the fate of Mercy Street looking bleak, we need this show to survive and to reflect solid history.

And speaking of Harriet Tubman: The National Park Service opened its brand new Harriet Tubman Underground Railroad Visitor’s Center and museum out on Maryland’s Eastern Shore! (Such a wonderful area on the eastern seaboard). Tubman spent the first 30 years of her life as a slave in the area, so it is an appropriate location. This is on my list of things to visit in May (along with Philadelphia’s new Museum of the American Revolution,  the new American Revolution Museum at Yorktown, and of course the Smithsonian’s National Museum of African American History and Culture). Sounds like a great trip, doesn’t it? Reviews forthcoming!

Meanwhile, in Egypt: Did you see the story about the discovery of a massive statue buried in the slums of Cairo? It appears that it might be a representation of Ramses II, but sadly, it has been broken into pieces during the excavation. Nice work.

3 thoughts on “So who might save Mercy Street?; Underground’s season premiere was rousing but problematic; New Tubman museum!; Ramses II emerges from the Cairo mud”