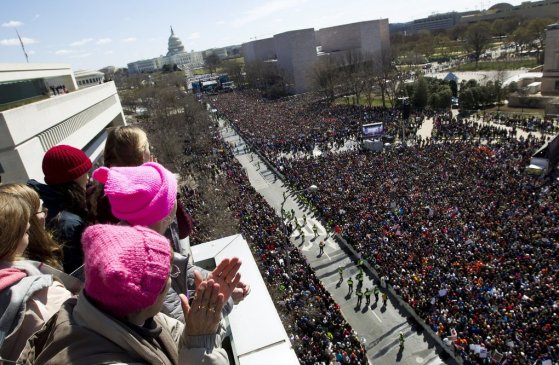 Flashback to the day after the 2016 election when I wrote this on my blog:

“After spending all day acting as a counselor for classrooms of college students that are angry and frightened by these results, I am actually a bit hopeful that the Election of 2016 will go down in history as the event that caused the millennial generation (and/or generation z) to create a powerful political movement that will be a force to be reckoned with. I heard them say some really powerful and encouraging things today. Stay tuned.”

Since then, more and more events have convinced me that this will turn out true, obviously none more than today’s “March For Our Lives” across the country. Yes, the shooting in Florida was the immediate catalyst for this movement, but it has been brewing well before now and is really about more than just gun control—and it is more than just teens.  The last year and a half has seen more highly attended marches, demonstrations, protests, and rallies than we have seen in a very long time. We’ve also seen several special elections that have reversed decades of voting patterns.

Is this all adding up to something big? Something revolutionary (again, beyond just gun control)? Only time will tell, but it sure looks like it today.

Besides a huge voting block, were there any future influential lobbyists and pundits, congressmen and women, judges, and presidents in the crowds of marchers? You can bet on it.

Yet it is perhaps too easy to dismiss the marches today as the product of naive, and overly emotional young people that do not fully understand the issues, or what they are up against.

To that, I say, almost every major successful movement in our nation’s history has been the result of the efforts of naive, overly emotional young people that perhaps did not fully understand what they were up against—including the protest movement that led to our independence and the founding of our Republic, and all the later movements that expanded the number of people that receive protection for their individual rights.

If you love our country and the rights that Americans have which are protected by our laws and Constitution, you must understand that those beautiful things are the results of protests movements—–usually led by the young.

To demonstrate the point, lets take a very brief look at some of those movements in our history, focusing on the ages of  just a select few  (for the sake of brevity) of the more famous and prominent leaders of those movements.

Thomas Jefferson, author of the Declaration of Independence, was 26 when he was first elected to the Virginia House of Burgesses and began arguing court cases in his legal profession that leaned on his belief in the “natural rights” of man and that the purpose of government was to protect those rights.

James Madison, considered the Father of the US Constitution, was 23 when he joined a pro-revolution militia unit. Just a year later, he was a member of the Virginia convention that broke the state free from the British empire, producing the Commonwealth of Virginia’s first constitution. At the convention, young Madison argued vehemently for separation of church and state and protection of religious freedom.

Alexander Hamilton, the “other” Father of the Constitution and current Broadway sensation,  was 17 (or 19, there is dispute about his birth year) when he too joined his local pro-revolution militia company, soon serving on George Washington’s staff and becoming part of his very exclusive inner circle as they fought a rebellious war against their own government. 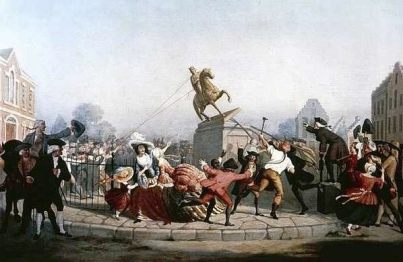 Young and naive protestors in NYC  energetically and defiantly knocking down a statue of King George III.

William Lloyd Garrison was 25 when he joined the anti-slavery movement, soon becoming one of its most important leaders, later publishing the newspaper The Liberator, promising ” I am in earnest—I will not equivocate—I will not excuse—I will not retreat a single inch—and I will be heard.” His paper helped unite the many localized abolitionist organizations, creating a powerful national organization that challenged a system that legalized human bondage.

Frederick Douglass was a young teen when he engaged in his first acts of defiance against slavery, clandestinely learning to read and getting into a physical confrontation with an overseer. He was about 19 or 20 years old when he successfully escaped from slavery, and 23 when he gave his first anti-slavery speech. 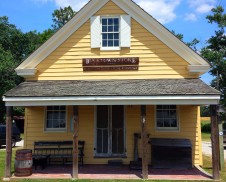 Harriet Tubman was a pre-teen when she committed her first act of defiance, refusing to help a slave catcher wrangle a runaway slave and getting hit in the head with an iron as a result. She was 29 when she successfully escaped and soon began her famous Underground Railroad activities, helping undermine a system that was protected by government laws.

Susan B. Anthony, perhaps the most important suffrage leader of the 19th century, was in her twenties when she first began to attend and lead local social reform movement meetings.

Carrie Chapman Catt, who later built the League of Women Voters, was in her mid twenties when she first got involved in the Gilded Age women’s suffrage movement. She was later instrumental in the movement to get states to ratify the 19th amendment. 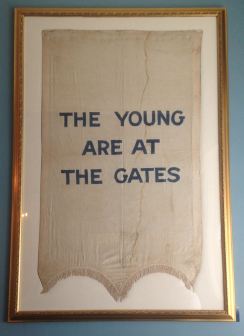 Suffrage banner held during the White House protests of 1917

Alice Paul, perhaps the most important of the 20th century suffragettes (radicalizing the movement by leading protests at the White House and engaging in a hunger strike after being arrested), was 22 when she moved to England, got involved in the British women’s suffrage movement, and came to believe in that movement’s more militant tactics. She soon came home and brought youthful energy and activism to a stalled movement that soon broke the stubborn resistance of President Woodrow Wilson and got his support for the 19th amendment.

This is perhaps the best example of the point being made, so the number of names here is WAY too few in number to do it justice, . . . yet still enough to support the point.

The 1950s and 1960s Civil Rights movement was largely energized by the defiant actions of 14 year old Emmett Till, which led to his lynching and the subsequent moral outrage from a nation shocked by his mother’s decision to have an open casket funeral so the world could look directly in the face of the violence of white supremacy.

Claudette Colvin was 15 when she was arrested for breaking Montgomery’s bus segregation laws, the often forgot progeny of the legal case that gained larger attention after the arrest of Rosa Parks and the subsequent bus boycott.

The “Little Rock Nine” were 16 and 17 year olds that choose to participate in the integration of the city’s main public high school, causing a confrontation that soon 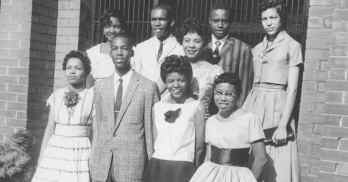 involved the Arkansas governor, President Eisenhower, and US troops, beginning the slow and torturous process of school integration in America.

The lunch counter sit-in movement was started when 18 and 19 year old college students in Greensboro, NC., planned and executed a protest of local segregation laws at their local Woolworth Store.

The Student Non-Violent Coordinating Committee (SNCC, often pronounced “Snick”) was organized and led by college students in their early 20s. The violent resistance the movement received in reaction to its efforts brought wide-scale media attention to the Civil Rights movement’s agenda, creating many moral crises that repeatedly forced the federal government to intervene. Perhaps their greatest results came with the Nashville Sit-ins, where 22 year old Diane Nash emerged as a particularly well spoken and charismatic leader, and the Freedom Rides, which included the 20 year old John Lewis, who later at the ripe old age of 25 led the March across the Pettus Bridge in Selma which pushed LBJ into pressuring Congress to pass the 1965 Voting Rights Act. 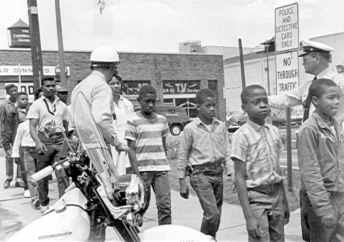 The young, marching off to jail in Birmingham, 1963

Gwendolyn Sanders was 13 years old when she helped organize her classmates to participate in the 1963 Birmingham protests which led to the famous confrontation between young blacks and Eugene “Bull” Conner’s firehoses and police dogs, an event that sparked JFK to propose the Civil Rights Bill, which later ended public segregation.

And let’s not forget that Martin Luther King Jr. himself was only 26 when he was asked to help lead the Montgomery Bus Boycott movement.

Further, the Civil Rights movement’s successes were an inspiration for the Vietnam War protests that successfully turned public opinion against the War in Vietnam. It too was a youth movement in which upwards of 80% of college campuses held some form of protests, eventually resulting in the end of America’s involvement in a senseless war in which the young were paying the greatest price.

Of course this short list of names misses hundreds of thousands of others, from prominent leaders, to the largely unknown names of young Revolutionary soldiers, picket-sign makers, and tireless and brave marchers that were carted off to jail by the hundreds, frequently beaten, and all-too often killed because of their determination to change America in ways that made it live up to its promises of protection for the natural rights of all.

“And that’s what the young people here today and listening all across the country must take away from this . . .” our last inspiring president reminded us a few years ago while standing in front of the Pettus Bridge in Selma:

“You are America. Unconstrained by habits and convention. Unencumbered by what is, and ready to seize what ought to be. For everywhere in this country, there are first steps to be taken, and new ground to cover, and bridges to be crossed. And it is you, the young and fearless at heart, the most diverse and educated generation in our history, who the nation is waiting to follow.” 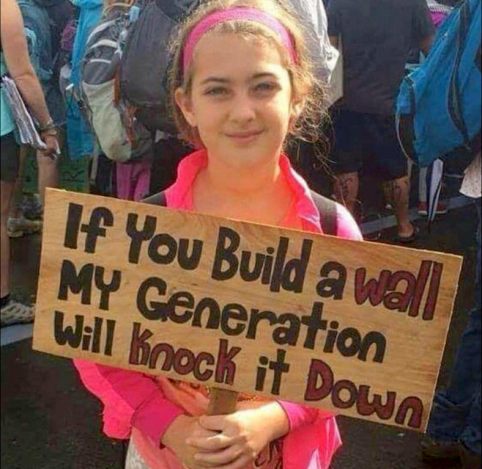