Now that NBC’s Timeless is about to wrap up their season with another visit to the Civil War, I have had a few people ask my opinion of the show after it has had two seasons. (What’s with these short TV seasons these days? Remember when a full season of a show was 22+ shows?)

Initially, I viewed the show as pretty harmless fun, and I still feel that way, but it is actually a bit more than that.

In case you haven’t been watching, Timeless involves a team of time-traveling heroes that are at war with an evil Illuminati–like organization called Rittenhouse, which is desperately trying to destroy democracy so the world will be run by a select few superior peoples. Namely, themselves.

The nefarious organization tries to accomplish this task via time travel and the planting of “sleeper cell” agents in the past, who at the right moment, are ordered to complete a task that will alter humanity’s time-line which is marching toward greater democracy. This almost always involves an attempt at killing some key historical figure at a moment before they can accomplish their deed. The job of our heroes, of course, is to stop them, and/or to mitigate the damage.

It is up to this diverse group of heroes to keep the arc of the moral universe bent towards justice.

The show’s creators have wisely decided to keep their time-travel rules simple so that the show is less about the sci-fi and more about the history. I like that choice, of course.

But our heroes do have to make sure that the time-line gets altered as little as possible, and that does not always happen. The big events essentially remain the same, but some of the details get altered because of their efforts. Let’s call it a small price to pay in order to save the world from tyrannical rule.

So from the perspective of an historian, what is good about the show, and what is bad?

If you have read many of my blog postings, you know I am sympathetic to the “arc of history bends towards justice” view of American history that President Obama has championed. No, that doesn’t mean that the arc always goes the way we want, instead, it means we are responsible for keeping it moving in that direction–and that despite the significant forces pulling the other way, mankind has slowly overcome them and successfully kept things on the right trajectory. It is a fight we must vigilantly continue.

Timeless seems to embrace that concept as well, as Rittenhouse goes into the past to essentially try to bend the arc in another direction, and our heroes are there to stop them.

Each week we are treated to a little history lesson that often demonstrates that the past was not a great place for minorities. That alone helps fight the “golden age” concept that gets peddled too much these days (that there was a time in the past that was so much better than our present, and that we need to get back to that again).

But we also get a history lesson about a historical figure with which most people are probably unfamiliar. Rittenhouse knows their history well, so their targets are usually more obscure figures that did big things.

This of course also makes it more difficult for our heroes to know exactly what they are up to. If you track the bad guys to landing on December 7, 1941, it’d be pretty obvious what they were trying to shape. But what if they have landed in San Antonio on November 23, 1936?

Yes, in the largely inferior first season we did get storylines and brief appearances by Franklin, Washington, and Lincoln, and the second season had an episode involving JFK (in his high school days. That was kinda cool). But more frequently this season, audiences have learned about more obscure figures who nevertheless did big things.

And there is great diversity among these figures. Timeless understands the world has been shaped by more than just white men. So far this season, viewers have been treated to little history-lessons-of-the-week involving less familiar people such as Marie and Irene Curie, Hedy Lamarr (1940s Hollywood! Fun!), Abiah Franklin, Grace Humiston, Alice Paul (who should not be less well known), as well as African Americans Wendell Scott and Robert Johnson.

That’s a pretty good lineup, and Timeless usually gets most of the details about these people and their contributions to the world mostly correct (the Alice Paul storyline being the biggest exception). The show is getting about 2.5 million viewers per episode (which is way down from the first season, but the critical response has been higher). This means they are educating a lot of people about the diversity of historical actors that have shaped and created the more democratic and inclusive world we currently inhabit, and they are doing it mostly well. Bravo, Timeless.

But here’s the ironic thing, in doing so, they are at the same time embracing the “great man” theory of history. That is, simply put, that the history of the world has been shaped by certain great men that were born as exceptional individuals, and that their actions alone have shaped most of history. The history of the world, the theory argues, can thus be told within the context of the biographies of these great and exceptional men.

Yes, the historical figures on Timeless are more obscure, and very often not men, so how can one say that the show embraces great man theory?

Because the creators are often attributing big events and movements to the actions of just one individual, and if that individual does not accomplish their task, the whole world would be different. Abiah Franklin can’t be killed in the Salem witch trials, we are told, because if so, Ben Franklin would never be born to advance democracy.

Two other examples from this past season make the point stronger. In one particularly excellent and fun episode, we learn about African American blues guitarist Robert Johnson. He makes a recording of his inventive and distinctive style of blues music in San Antonio in 1936. If that recording doesn’t get made, Timeless tells us, his influence on American music is destroyed, and with it, the emergence of rock-n-roll, and with no rock, we get no 1950s and 1960s protest/counter culture, which means no Civil Rights movement, no withdrawal from Vietnam, no fall of Nixon. 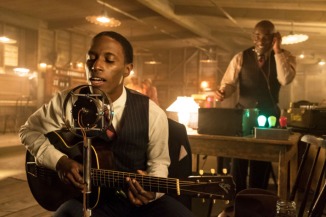 The Robert Johnson episode. Rock must be saved!

Huh? As a blues lover, I love Johnson, and I appreciate the effort to demonstrate the cultural and political influence of Rock, but the show asks us to disregard the myriad other musicians and influences that shaped American music, especially those that came before Johnson. As an amalgamation of African American jazz, gospel, and blues, with elements of country music stirred in, rock was coming, Johnson or no Johnson.

As for protest/counter culture, doesn’t the liberal consensus, the Cold War, and television insure its emergence, with or without rock? Didn’t those very same things provide momentum for Civil Rights, which provided momentum for the war protests, etc. ? How is rock music the most essential key ingredient? It was an important one, no doubt, but crucial?

The other example: another episode focused on suffrage hero Alice Paul. I was very excited about this episode, as I am a big fan of Paul and believe she should be much more well known than she is. Yet the episode argues that if she had not delivered one particular diatribe within earshot of, and directed at, Woodrow Wilson, the suffrage movement would have failed, and American women would have never gotten the right to vote.

Not only does the episode get the details wrong about Wilson’s stance on women’s suffrage at the moment in time depicted (he had already succumbed to the movement’s intense pressure), but it asks us to believe that a movement that had gained steam after close to one hundred years of work by untold thousands of suffrage workers would have been wiped out in a moment had one particular speech not been given. 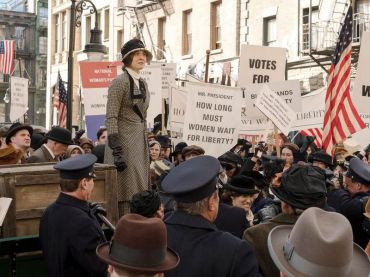 The suffrage episode: somebody has to make that speech!

Most frustrating to me in the episode is that when Rittenhouse succeeds at killing Paul, our heroes implore the other women to make sure the speech gets delivered, yet none of them are willing to do so. Paul was exceptional, but come on, there were plenty of motivated and eloquent women in that movement that could have easily stepped up to the plate. Lucy Burns comes to mind, for just one example.

So does the good of the show outweigh the bad?

I am a big believer in what historians often refer to as “contingency” in history, and Timeless’s entire premise is based on it. Events in history have not been inevitable, and are the product of decisions, choices, and actions that mankind has made. Different decisions or choices would have resulted in different outcomes.

(And yet at the same time, Timeless also asks us to consider whether or not certain things are destined to happen, no matter what we do. Consider this season’s JFK episode, for instance).

It is important for people to understand historical contingency, because it encourages us to become actively involved in shaping what happens to our world. Keeping the arc bent toward justice requires our vigilance and action. Contingency teaches us that it is our responsibility to keep things moving in the direction we want. What happens is not inevitable, because what has happened in our past was also not inevitable.

Timeless brilliantly makes that point, and does so by demonstrating that our world has been shaped by more than just dead white guys, highlighting a diversity of history’s most important contributors. But the cast of heroes charged with ensuring that things stay on the right path is also a very diverse group. The point of the show could not be any more clear, and it is a needed one.

Anyway, in the end, the show is a bit of harmless fun, and at its best it is giving good history lessons to large audiences. And it is doing so in a way that diversifies our history and embraces contingency theory—showing how important our actions and decisions are in shaping the world in either positive or negative directions.

That, and debunking the “golden age” of the past, are pretty important message to be sending out right now.

The two-hour season finale (and possibly the series finale) is set for this Sunday. It appears that Rittenhouse is headed back in time to help the Confederacy win the Civil War. Uh oh!

And it looks like it will involve Harriet Tubman. Yeah boy!

A scene for the upcoming finale of Timeless.

That should prove to be an interesting episode, and perhaps a hit at the Lost Cause. Let’s see how well they pull it off.

(Oh, and if you subscribe to Hulu, you can quickly get caught up on both seasons one and two).