Back in May, I got to visit the new American Civil War Museum at the Tredegar Iron works. Like many of you, ever since it was announced the Museum of the Confederacy was joining forces and bringing their collection to the project, I’ve eagerly awaited the grand opening. So much so that I got there as soon as my teaching schedule allowed, which thankfully was only two weeks after they first opened the doors.

But really, I’ve been waiting even longer than that.  Fresh out of college I moved to Richmond in 1993 to get a masters degree at VCU and explore all of Virginia’s historic treasures. While the Commonwealth itself did not disappoint (and still doesn’t), I admit Richmond was a let down.

Monument Avenue’s Lost Cause statuary was impressive, of course, as was the White House and Museum of the Confederacy, and Hollywood Cemetery. But beyond that, the pickings were slim for a Civil War buff expecting a lot more, and wanting something that wasn’t steeped in the Lost Cause.

The Lee Statue on the famous (now infamous?) Monument Avenue.

Even the Richmond National Battlefield Park was a disappointment, with its very outdated exhibits at the site of Chimborazo Hospital (and a film focused on the plight of a middle class white Richmond family during the war), and only small bits of preserved battlefield lands scattered around the eastern suburbs with minimal interpretation—-and that interpretation mainly focused on the Confederate perspective.

It was not the Richmond of which I’d daydreamed.

Fortunately, that began to change just as I arrived. I volunteered and then got a summer seasonal job with the park service, and over the next 8 years got to witness exciting and near constant changes at the park, as a really great staff of historians got more funding, installed more interpretive signs and trails in the park, acquired more land (they now have dang near all of Malvern Hill and Glendale, and an ever increasing amount of Gaines’ Mill and Cold Harbor), restored historic landscapes, and created a beautiful, cutting-edge visitor’s center in one of the remaining buildings of the historic Tredegar Ironworks.

Just as I left the city to return to Alabama to work on a PhD with Dr. George Rable, Richmond itself got in the updating game, cleaning up and restoring the historic canal walk on the river, repurposing crumbling old warehouses into modern apartments, and cleaning up the surrounding areas around the James River. Then the American Civil War Center opened up next door to the NPS visitor’s center at Tredegar.

The city had become much more of what I envisioned before going there, including now even a monument commemorating Lincoln’s triumphant visit to the city with his son just as the Capital of the Confederacy fell to Union forces.

Tad & his dad in Richmond

Monument Avenue still lingers, but more inclusive stories are being told, with less Lost Cause distortions. There’s even interpretation of Richmond’s slave pens and markets.

And yet, something has still seemed missing. While the NPS center at Tredegar is great, it appropriately focuses on Richmond and the battlefields, and while their neighbor, the American Civil War Center, was telling a comprehensive story of the war in general, it was heavy on interpretation and light on relics.

Thus when it was announced that the museum was spending around 25 million to build a new, high tech, 28,500 square facility (much of it underground) in and around the Tredegar site, and that they would be incorporating relics from the Museum of the Confederacy, excitement was high that Richmond would now become THE premiere place for Civil War public history interpretation (as it should be).

So, does the museum live up to the high expectations and hype?

Well, yes, and no. Let’s just say this, it has enormous potential.

Just inside the front doors.

First off, after walking through its beautiful entrance and lobby that encloses Tredegar ruins that were long exposed to the elements, and then past visually stunning enlargements of colorized war-time photographs (featuring a diverse cast of wartime faces), I was ready for an amazing visit.

Because of poor signage, however, it was difficult to figure out which door to walk into for the main exhibit gallery. I started to go in the “out” door, as did many others that I observed. That should be an easy fix though.

Once inside, I was surprised by how small the permanent exhibit space actually is. Having recently visited the two new Revolutionary War museums in Philadelphia and in Yorktown, I was perhaps expecting too much, as those facilities are huge and nicely spread out. This one takes you from 1861-1865 at comparatively warp speed.

Further, there was curiously little interpretation of the causes of the war, which was contrary to everything I expected considering all the hype about taking the war away from Lost Cause interpretation.

But here is the main problem: the museum is making great effort to tell a more inclusive and diverse narrative of the war, and the written interpretation does so. But the artifacts they have now are just not yet helping them tell that story. 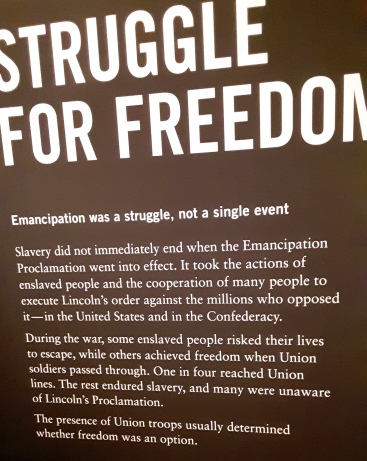 Solid interpretation. But unfortunately, few of the relics help tell this story

Yes, you won’t find many Civil War museums with an audio and visual presentation telling the story of an enslaved girl that was brutally whipped for allegedly poisoning her owner, or that displays slave shackles, or that interprets the post-war years by featuring a Reconstruction era KKK hood and garment.

Not exactly a common site in a Civil war museum, though it should be.

The African American story, as well as the Union story, are both featured throughout the exhibits. There is also homefront and gendered history, but with few exceptions (like the ones just mentioned) the artifacts packed behind the glass cases are overwhelmingly the treasures from the old Museum of the Confederacy.

But Oh! What a collection it is! I won’t spoil it for you by naming too much, but you’ll be stunned at the personal wartime possessions on display that were owned by the pantheon of Confederate luminaries, from Jefferson Davis, to Lee, to Stonewall, to Jeb Stuart. (You know, all those dudes out there on Monument Avenue.)

Of course all this was on display at the old Museum of the Confederacy, but it makes it no less amazing to see them again, especially in this more inclusive context and in the new digs.  You’ll find yourself staring in awe at such things, seemingly tucked away in the corners.

This display, for example, is a Stonewall Jackson fan’s dream come true.

Here’s a big tip: DO NOT rush through this museum. Read EVERY description of EVERY relic. What they have will blow your mind. Just one small example: the sword Lewis Armistead used to urge rebel soldiers forward into Union lines just as he was mortally wounded during “Pickett’s Charge” at Gettysburg. But you’ll miss it and other jaw-dropping possessions if you aren’t paying attention.

And yet, as amazing as these things are, they are just not helping the museum to tell the story it strives to tell.

The battles themselves get shunted away to high tech electronic video boards that visitors can interact with, which is fine, I’d rather see visitors get out to the battlefields themselves if that is what they are looking for. But theoretically that means the museum should be focused on social and cultural history, and most of the interpretation is, but yet the most attention-grabbing relics are largely battle-related accouterment from southern soldiers and officers.

My guess is that the museum’s folks are aware of this problem, and that the acquisition of other relics must become their number one goal now that the space has been constructed and the doors open. (I hope they are aware of this auction, for example).  Having such stunning possessions from Lee, Jackson, and et. al, makes it all the more glaring that there is essentially nothing from Grant, Sherman, and Lincoln or etc. on display. What few Union relics are on display are related to POWs that were penned in Richmond’s warehouse prisons.

How nice would it be, for instance, to juxtapose the relics of Robert E. Lee, with those of Union General George Henry Thomas, contrasting the two Virginians and drawing attention to a southern white man that unlike Lee, refused to break his vow to the U.S. military to fight the constitution’s enemies, “both foreign and domestic.”

And there are precious fewer artifacts telling the African American perspective on the war. Don’t expect to see many rifles or other possessions carried by the USCTs that were among the city’s first liberators, for example. If you saw Harriet Tubman’s shawl at the new Smithsonian National Museum of African American History and Culture, or Nat Turner’s bible there, you won’t find similar items here, despite the fact that the museum’s objectives and narrative would make those types of relics a perfect fit.

I really don’t want this to sound like a negative review, however. There is so much room for growth in this facility. Over time, I have no doubt that future acquisitions and perhaps loaned items will help the American Civil War Museum tell the story it is telling.

And I especially do not want to discourage anyone from visiting the museum in its current incarnation. On the contrary, go now and ASAP. I promise you will be awed by the facility’s location, design, and the amazing relics on display. And you’ll be impressed by its interpretation.

Let’s please give the American Civil War Museum all the support, encouragement, and positive “word-of-mouth” we can, as they are trying to tell important stories that will move Richmond, and us, even more away from the Lost Cause.

Yes, that’s a rebel flag, but it is one that Tad Lincoln took home with him as a trophy after he and his father visited Richmond. How cool is that? Now THAT is the perfect context for displaying that thing.